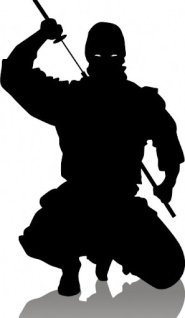 James Bond: ‘Do you have commandos?’

Tiger Tanaka: ‘I have much, much better. Ninja’s. Top-secret, Bond-san. This is my ninja training school’.

As a consultant who helps organisations in times of transition, I’m minded to see what I do as an art, rather than a science. In simple terms, change management is about moving organisations and individuals from a current state to a desired future state, the implication being that the future state is somehow an improvement.

Yet we know that 70 per cent of transformation programmes fail.  This is the science bit! The statistic is based on research done by John P. Kotter, change management guru. It underscores the difficulty of catalysing change in large, complex organisations. From experience I can tell you that major change programmes demand a combo of pragmatic perseverance and managerial martial arts. Which is where the Ninja enter the room!

Ninja (or shinobi) were covert agents, stealth soldiers or mercenaries in feudal Japan. They specialised in unorthodox warfare.  The functions of the ninja included espionage, sabotage, infiltration, assassination and open combat in certain situations. Sound like any organisations you know? Yep. Me too!

Despite the negative perception of ninja’s as spies, deceivers, saboteurs and arsonists, there are several positive aspects to their methods and training:

As a change agent, I’m very often expected to draw on similar resources. I have to be resourceful – using what shows up at any given moment, whether that’s in a management meeting or my in-box! I have to demonstrate mental agility – change creates ambiguity in organisations, and not everyone is good at dealing with it. It’s vital to be able to suss out possible outcomes and unintended consequences so you can head them off before they become a burning issue. It’s what my clients pay me for. And yes, sometimes I do have to practice my art with subtlety – it’s what I call ‘sneaky change management’.